The Sanctuary of Loreto has always been a pilgrimage destination, attracting the interest not only of religious tourists but also of art lovers. Much of the notoriety is surely due to the unique architectural relic preserved in the Basilica and the stories related to it.

Loreto Sanctuary is dedicated to the Marian cult, widespread in this place after the angels moved the Holy House from Palestine, that is the house of Mary where she received the Annunciation and where Jesus spent most of his life.

The legend, confirmed by several sources, said that during the night of May 12, 1291 after an attack by the Saracens, the angels lifted the home of Mary and brought it in Dalmatia on the Adriatic coast, between Fiume and Tersatto. Some years later, December 2, 1294, the angels rose again to bring it in Recanati, in a forest infested by brigands and where once stood a pagan temple. Then the house was moved to the lands of two brothers who took advantage of the relic and the faith of the pilgrims, taking possession of the offers. So the angels moved the Holy House for the fourth and last time on the hill filled with laurels and upon which they built the Basilica and the town took the name of Loreto.

The “heavenly” version of the facts is challenged by the most historical and scientific, according to which the Holy House moved by the Princes Angeli Comneno, the family who wanted to save the Holy House before its fall into Muslim hands, and that they transported by sea. The question of translation still involves many scholars. What is certain is that the House is built with stone and mortar typical of Palestine and that was not logistically doable transport by ship. So the mystery remains.

Today, those who went to the Sanctuary of Loreto, find a solemn and majestic sanctuary, which contains as a fortress to the Holy Relic of Nazareth. The church is quite large, with a length of nearly one hundred meters divided into three naves and the center of the Latin cross is the Holy House. The original building consists of 3 stone walls, as Mary's house was a house of underground type, that is partially built into the cave. The Holy House has been covered with a marble covering designed by Bramante and with the missing wall was added and integrated as the main altar of the church.

Inside the Holy House is the famous Black Madonna of Loreto, the Virgin of Loreto even if the original was lost in the great fire of 1921. Near the statue of Our Lady of Loreto, on the bottom right, a plate is preserved, that the tradition says it was part of the kit with which Mary and the baby Jesus would have eaten.

At the top stands the small dome, by Giuliano da Sangallo, decorated with frescoes (the originals are kept at the Old Museum Treasury).

The Basilica has enriched the inside by numerous chapels, the decoration of which was financed by foreign community of faithful. Our Lady of Loreto is patron of aviation as can be seen in the recent frescoes in the Cappella dell'Assunta also known as American Chapel, in which are depicted scenes related to aviation, from the flight of Icarus to the first step of Neil Armstrong on the moon with Apollo mission.

In the Treasure Room, built in the “new sacristy" next to Basilica, are kept offerings to the Virgin. Among the golden objects and sacred furnishings, stand out of some special ex-vote: two pink shirts by Cunego and Di Luca, winner of the Tour of Italy and devoted to the Virgin of Loreto. 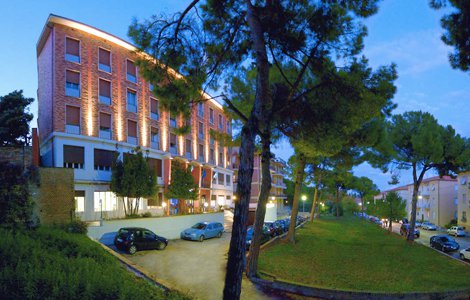